J. A. Van Der Goes: “Overthrow of the Turks by Vice-Admiral Willem Joseph”

Excerpt, “Batavian Anthology, or Specimens of the Dutch Poets, with a History of the Poetical Literature of Holland.” By John Bowring and Harry S. Van Dyk. London: 1824.

This famous writer was born at Der Goes in 1647. He had the good fortune early to gain the esteem of Vondel, who used to call him his son. He took the degree of Doctor in Medicine at the University of Utrecht, and became a successful practitioner. He died in 1684, at the early age of thirty-seven. 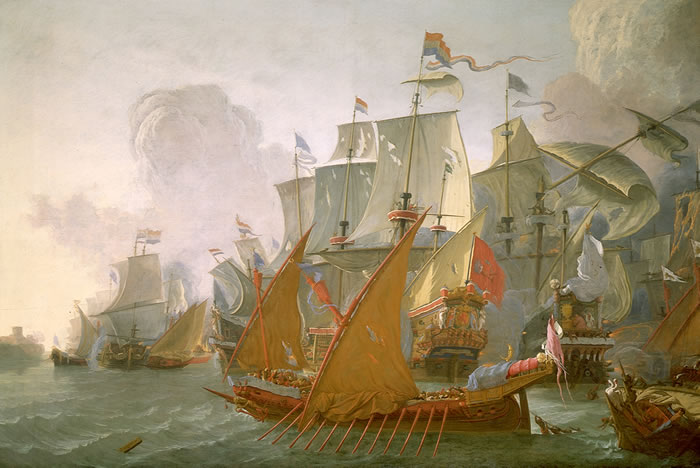 The Dutch in Tripoli
By Lieve Pietersz Verschuler c. 1670

OVERTHROW OF THE TURKS BY VICE-ADMIRAL WILLEM JOSEPH

Algiers, that on the midland sea

Sees now her crown in jeopardy,

And drops her cruel robber-sword.

The coast of Barbary, terrified,

Trembles beneath the conquerors’ sway;

Our heroes on her waters ride,

While the fierce bandits, in dismay,

And mad with plunder and with ire,

Are smothered in a sea of fire.

Thrice had the sun from the orient verge

Into his golden chariot sprung;

From the rain-clouds his rays emerge,

With brightest glory round him flung:

The northern winds are roused, — the Turk

Is borne along; — in vain he tries,

While terrors in his bosom lurk,

To ‘scape our glance: — in vain he flies.

In his pursuers’ toils around.

Ye rapine vultures of the sea,

Haste, haste before the storm and stream;

Stretch out your pinions now, and be

Have hemmed you in on every side;

And fain her paling horns would hide.

But no! But no! Ye shall be driven

From earth and ocean, as from heaven.

No! Terror shakes the Afric strand,

The Moor perceives his glory wane;

The madman glares with fiery brand,

As glares the heaven above the main.

The cannons rattle to the wind;

Black, noisome vapors from the waves

The bright-eyed sun with darkness blind;

And Echo shouts from Nereus’ caves,

As if, with rage and strength immortal,

How should they stand against the free, —

Hath loved to crown with victory,

The Amstel’s thunders roar around,

While the barbarians clamor loud,

And, scattered on their native ground,

The base retire before the proud;

While their sea-standards, riven and torn,

Are but the noisy tempest’s scorn.

By their commander. Ocean’s freed

From its old tyrants, — and in dread,

On the wide waters when they bleed,

From that inhospitable shore

Upon the mingled flame and smoke

Whose power is lost, and riven his yoke:

He stamps and curses, as he sees

How his fear-stricken brother flees.

Of virtue. Gratitude shall speed

Your future course: Ye have unbarred

The prison-doors of many a slave,

Whom heathen power had bound, and these

In memory’s shrines your names shall have;

And this shall be your stainless praise,