Thought goes before the deed as lightning precedes thunder.
German thunder is indeed German, and not in a hurry,
and it comes rolling slowly onward;
but come it will,
and when ye hear it crash as naught ever crashed before
in the whole history of the world,
then know that der deutsche Donner,
our German thunder,
has at last hit its mark.

At that sound the eagles will fall dead from on high,
the lions in remotest deserts in Africa will draw in their tails
and creep into their royal caves.
There will be played in Germany a drama compared to which
the French Revolution will be only an innocent idyll.

Just now all is tolerably quiet,
and if here and there someone behaves in a lively manner,
do not believe that the great actors have as yet
appeared upon the stage.
They are only the little dogs who run round in the amphitheatre,
and bark and bite one another,
before the hour begins when the great array of gladiators will enter,
and war to the death … or for life.

Day before yesterday I left my quarters here before dawn, but came back today, and have meanwhile been through the great battle of Sedan on the 1st, in which we took some thirty thousand prisoners, and shut the remainder of the French army, which we had chased ever since Bar-le-Duc, into the fortress, where they had to surrender, with the Emperor, as prisoners of war.

At five yesterday morning, after I had discussed the terms of capitulation with Moltke and the French generals till one o’clock, General Reille, whom I know, called me up to say that Napoleon wished to speak with me. Without washing or breakfast, I rode towards Sedan, found the Emperor in an open carriage with three adjutants, and three more at hand in the saddle, on the main road before Sedan.

I dismounted, saluted him as politely as in the Tuileries, and asked his commands. He desired to see the King. I told him, as was true, that his Majesty’s quarters were fourteen miles away, at the place where I am writing now. Upon his question, whither he should betake himself, I offered him, since I was unfamiliar with the region, my quarters in Donchery, a village on the Maas close to Sedan; he accepted them, and drove, escorted by his six Frenchmen, by me; and by Carl, who meanwhile had ridden after me, through the lovely morning, towards our lines.

He was distressed before reaching the place because of the possible crowds, and asked me if he might not stop at a lonely workman’s house on the road. I had it examined by Carl, who reported that it was wretched and dirty. “N’importe,” said Napoleon, and I mounted with him a narrow, rickety stairway. In a room ten feet square, with a fig-wood table and two rush-bottomed chairs, we sat an hour, the others staying below. A mighty contrast to our last interview, in ’67, at the Tuileries.

Our conversation was difficult, if I would avoid touching on things which must be painful to those whom God’s mighty hand had overthrown. Through Carl, I had officers brought from the city, and Moltke requested to come. We then sent out one of the first to reconnoitre, and discovered, a couple of miles off, at Fresnoi’s, a little château with a park. Thither I conducted him, with an escort of the Cuirassier body-guards, which was meanwhile brought up, and there we concluded the capitulation with Wimpfen, the French general-in-chief. By its terms, from forty to sixty thousand French–I do not yet know the number more exactly–became our prisoners, with everything they have.

The two receding days cost France one hundred thousand men and an emperor. He started early this morning, with all his court, horses, and wagons, for Wilhelmshöhe, at Cassel. It is an event in universal history, a triumph for which we will thank God the Lord in humility, and which is decisive of the war, even though we must continue to prosecute it against headless France.

I must close. With heartfelt joy I have learned today, from your letter and Marie’s, of Herbert’s reaching you. I met Bill yesterday, as I telegraphed you, and took him to my arms from his horse before the King’s face, while he stood with his limbs rigid. He is entirely well and in high spirits. Hans and Fritz Carl and both the Billows I saw with the Second Dragoon guards, well and cheerful.

Farewell, my heart. Kiss the children. 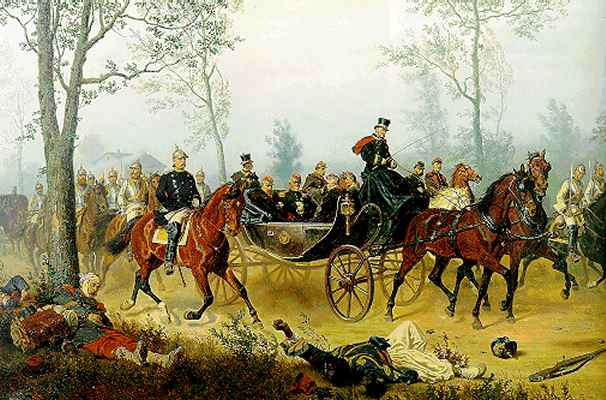 Napoleon III. and Bismarck on the way to Wilhelm I on the morning after the battle of Sedan. Wilhelm Camphausen, 1877.