From Thomas Carlyle’s “German Romance: Specimens of its Chief Authors; with Biographical and Critical Notices.” Vol. II, 1827. Excerpt: “The Golden Pot” by E.T. A. Hoffmann. 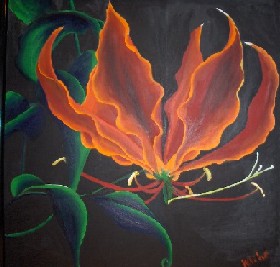 The Spirit looked upon the water, and the water moved itself, and chafed in foaming billows, and plunged thundering down into the Abysses, which opened their black throats, and greedily swallowed it. Like triumphant conquerors, the granite Rocks lifted their cleft peaky crowns, protecting the Valley, till the Sun took it into its paternal bosom, and clasping it with its beams as with growing arms, cherished it and warmed it.

Then a thousand germs, which had been sleeping under the desert sand, awoke from their deep slumber, and stretched out their little leaves and stalks toward the Sun their father’s face; and the smiling infants in green cradles, the flowrets rested in their buds and blossoms, til they too, awakened by their father, decked themselves in lights, which their father, to please them, tinted in a thousand varied hues.

But in the midst of the Valley was a black Hill, which heaved up and down like the breast of man when warm longing swells it. From the Abysses mounted steaming vapours, and rolled themselves together into huge masses, striving malignantly to hide the father’s face: but he called the Storm to him, which rushed thither, and scattered them away; and when the pure sunbeam rested again on the bleak Hill, there started from it, in the excess of its rapture, a glorious Fire-Lily, opening its fair leaves like gentle lips to receive the kiss of its father.

And now came a gleaming Splendour into the Valley; it was the youth Phosphorus; the Lily saw him, and begged, being seized with warm longing love: “Be mine for ever, fair youth! For I love thee, and must die if thou forsake me!” Then spake the youth Phosphorus: “I will be thine, thou fair flower; but then wilt thou, like a naughty child, leave father and mother; thou wilt know thy playmates no longer, wilt strive to be greater and stronger than all that now rejoices with thee as thy equal.

The longing which now beneficently warms thy whole being, will be scattered into a thousand rays, and torture and vex thee; for sense will bring forth senses; and the highest rapture, which the Spark I cast into thee kindles, will be the hopeless pain wherein thou shalt perish, to spring up anew in foreign shape. This spark is Thought!”

“Ah!” mourned the Lily, “Can I not be thine in this glow, as it now burns in me; not still be thine? Can I love then more than now; could I look on thee as now, if thou wert to annihilate me?” Then the youth Phosphorus kissed the Lily; and as if penetrated with light, it mounted up in flame, out of which issued a foreign Being, that hastily flying from the Valley, roved forth into endless Space, no longer heeding its old playmates, or the youth it had loved.

This youth mourned for his lost beloved; for he too loved her, it was love to the fair Lily that had brought him to the lone Valley; and the granite Rocks bent down their heads in participation of his grief.

But one of these opened its bosom, and there came a black-winged Dragon flying out of it, and said: “My brethren, the Metals are sleeping in there; but I am always brisk and waking, and will help thee.”

Dashing up and down on its black pinions, the Dragon at last caught the Being which had sprung from the Lily; bore it to the Hill, and encircled it with his wing; then was it the Lily again; but Thought, which continued with it, tore asunder its heart; and its love for the youth Phosphorus was a cutting pain, before which, as if breathed on by poisonous vapours, the flowrets which had once rejoiced in the fair Lily’s presence, faded and died.

The youth Phosphorus put on a glittering coat of mail, sporting with the light in a thousand hues, and did battle with the Dragon, who struck the cuirass with his black wing, till it rung and sounded; and at this loud clang the flowrets again came to life, and like variegated birds fluttered round the Dragon, whose force departed; and who, thus being vanquished, hid himself in the depths of the Earth.

The Lily was freed; the youth Phosphorus clasped her, full of warm longing, of heavenly love; and in triumphant chorus, the flowers, the birds, nay even the high granite Rocks, did reverence to her as the Queen of the Valley.” 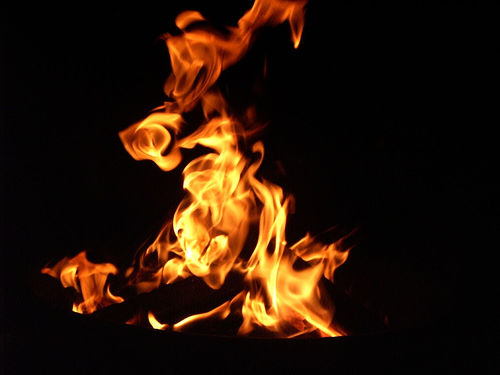