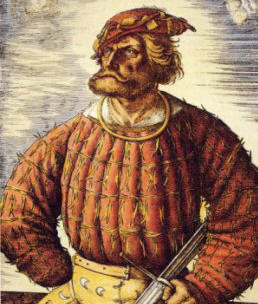 A Tradition of Friesland

The Society of Victuallers was formerly an association of adventurers who, during the wars of the Hanse-towns, were charged, by the hostile Powers of the North, at the end of the 14th century, to furnish provisions for the belligerent German party. After the peace, these adventurers became Pirates, and acted as enemies to both parties, on the high seas. Their two Chiefs, Klaus Störtebeker, and Godfrey Michael, filled the heart of every navigator with terror.

It is a well authenticated fact that, in the year 1402, Störtebeker, and seventy of his comrades, were made prisoners, on board the Hamburg vessels that had been sent from the Elbe against them. The Freebooters were conveyed to Helgoland, thence Hamburg; there executed on the Place de Grasbrook.

Klaus Störtebeker and his companions had experienced the most cordial reception in Friesland, and there his fleet found a secure and favourable harbour. In Friesland has long been propagated a tradition respecting the celebrated Pirate, which tradition forms the subject of the following romance.

The famed Klaus Störtebeker, the Hero of our lay,

With dread inspired each merchant, – yes, many, many a day!

Each seaman and each trader, Klaus’ name, with terror filled,

From Hamburg unto Wismar – from Bremen to Roskilde.

If, on a strand far distant, fluttered a pennon gay,

Klaus’ graceful, taper vessel would dart to seize the prey.

Each sail was wise extended, – like eagle’s pinion light:

Oft, with the Bremen gentry, how many a bloody fray

Was fought with Störtebeker, on ocean’s boiling spray!

“He comes with the fresh breeze!

Who saves?  Who delivers?  He comes, th’ audacious Friese!”

Grave Magistrates and Elders, with sage, yet troubled mind,

In state had oft assembled, for counsel, and to find

Some Practicable method, that Man, of fearful name,

To capture.  Ah! They parted, as wise as when they came!

The news was spread, like wild-fire, amid the town, one day,

That Störtebeker vessel was stranded in the bay!

She drifted on a sand-bank, the sport of adverse gales;

The spring-tide came, and vainly, the vessel spread her sails.

Darts through the burgers’ minds;

If, thence she be not wafted by brisk, auspicious winds,

Would be their price!

What courage the townsmen feel, once more!

Thus now, by general summons, the burgers seize their arms;

Of every kind of weapon, abundant is their store,

With sword, pike, spear, and pick-axe,

They march through Bremen’s door!

While howls the northern blast,

With frost, and fear, they battle;

Yet, reach the sloop at last.

How doth the freezing life-blood, from many a cheek depart!

How audibly resoundeth each throbbing of their heart!

They stand like mice, and listen:  the first of Klaus they fear.

How calm the ship!  At distance, loud breakers wild they hear.

Behold! On board the vessel they climb with panting breath:

Will not Klaus’ glances blast them?

Beneath his arm lurks death!

No! bravely move the Champions,

With limbs uncrushed, on board;

They beckon to their comrades, with many a gentle word,

And cautiously, on ladder, and rape, the valiant troop,

O’er the ships side ascending – stand on the Pirate’s sloop!

Nought stirreth in the vessel; nought breaks the silence there,

Save, a loud-echoing snoring that bursts upon the ear;

As, from a caverned bear’s den, when, overgorged with food,

O’erpowered by sleep, snores Bruin, with all his shaggy brood.

They steal into the cabin:  to ‘waken Klaus, they fear.

Surrounded by his comrades, behold the Buccaneer.

By wine intoxicated, beside his drunken crew!

Instead of quaffing brandy – what do the Victors do!

Bravely, with rope and shackle,

By night’s dear mists, are bound

That farfamed band of Pirates who, fast asleep are found!

Klaus turns his limbs gigantic; he darts upon the crowd,

Klaus stands before his Judges, within a gloomy tower,

Long paragraphs, by thousands, the crimes of Klaus relate,

Haste!  Send me to the scaffold, and terminate the fuss!

I’m doomed to execution, and no dissenting voice!

Will ye behead, or hang me?”  Small difference in the choice!

“Yet ah – Klaus, far better, than idly here to stay,

And gaze on you, old Grey-beards, thus, day succeeding day!

In Jurisprudence, doubtless, your knowledge is profound:

In battle ye’re courageous, with words of valiant sound!”

“Haste!  Send me to the scaffold, that after durance vile,

Again Man’s form may cheer me – they sun’s light –

On Earth’s green, flowery meadow, I pant to stand, once more

And each limb’s free-born vigour to feel, as heretofore!”

Our peace hath been endangered, by ruthless piracy!

Untried, we could have doomed thee, to death, upon the wheel:

Though judged by statutes legal; ungrateful dost though feel!”

So well are known!”

Knave – Pirate – have ye termed me?

What name is given to you?

A rookery of Swindlers!  The Bremen groveling Crew!”

“You practice favourite customs, as I have ever done;

From milk of yours, what gained I?

His manacles and fetters, Klaus rattles, ‘mid the air,

With nervous arm!  His Judges shake in each oaken chair!

“Prisoner, Klaus Störtebeker! To thee we grant the choice;

Wilt thou be burned – beheaded – hung –

With red-hot pinchers tortured, or, broken on the wheel?”

“Thy choice, how kind and liberal!” with stern,

Saith Klaus, – “In truth, a chaplet, of gentle kinds of death!

‘Twould please my fancy better, instead of fire – wheel – spear

At home, my limbs to strength with jugs of frothing beer!”

“Ye judges!  Death I fear not.  Will death my name disgrace?

Of this my wounds bear witness; wounds,

By foremen’s spear, and pistol, these limbs bear many a scar!”

“While, by my sword, I bravely won honourable bread,

When valiant men of Bremen, beneath that sword lay dead,

And when, ‘mid deadly conflict, ye Judges! Ere was dried

The blood of my companions, in gore, your Chiefs were dyed!”

“For this ye might excurse me, axe – gallows – halter – wheel!

Yet nay! Haste and behead me!  The sword I pant to feel:

You then may boast, with triumph, that ‘mid a noble strife,

By your victorious weapon, was Klaus deprived of life!”

Contented are the Judges:  this sentence stern they give:

Since thou, by theft, and murder, hast, long been wont to live,

Our peace hast thou endangered, at mid-day, night, and morn;

Thou laugh’st at our remonstrance

Our mercy thou doest scorn.”

“Since thou, of all art guilty, and more than this hast dared;

As rightful expiation for crime, and piracy,

That thou, and thy companions, Justice’s sword, shall die!”

Klaus Störtebeker nodded – but not a word he said,

And, from the Hall of Judgment, the Pirate bold was led.

The massive walls are trembling!  Do thunderbolts resound?”

No?  Störtebeker’s footsteps are echoing o’er the ground!

A day on which would no man, death, grief, or pain desire

A day when all would doubly, to life – joy – love aspire!

While Spring, with verdant carpet, adorns the perfumed meads,

With sleeves, tucked to his elbow, prepared for bloody deeds;

Behold the skilful Headsman! – The fatal sword he tries,

He laughs, with air sardonic – The weapon ready lies.

The Pirate views the Headsman flourish the sword, awhile;

“Today what glorious practice on many a carcass tough!

Oh, sharpen well they weapon! Or ‘twill be blunt enough,

Before thy work is ended, and severed is each head,

And ere the soil of Bremen is drunk with blood that’s shed!”

For thee, and thy companions, now, justly doomed to die;

Thou mayst demand one Favour – but, ask with modesty.”

Klaus thinks.  Not long he ponders.

“Since thus you, condescend,

That, in one line, my Comrades, assembled, now may stand!”

“List! When I am beheaded, before them will I tread;

Doubt you my word, sage Judges?  I’ll march without a head!

To all, I claim your Promise, Life and Freedom shall be given!”

They scarce refrain from laughter:

“A strange request  to make,

Oh Klaus!  A headless carcass to move, and march erect!

“Tis past our comprehension, yet, our Promise we respect.”

“We hope thou mayst succeed!

The exploit thou undertakest is a master-piece, indeed!

Thou Man of Works mysterious! –

This Boon we grant to thee.”

“My Word,” saith Störtebeker, “Oh Judge! will sacred be!

In one straight file assembled, the Pirates stand in view,

And, to their Friend –  Chief – Hero, they bid a last adieu.

When shaking hands, at parting, their hardy knuckles creak,

As when, ‘mid storm and tempest, twigs of the forest break.

Will all to speak, once more,

Yet, ere we part, Companions! Shake hands, as we have done

So oft, before a sea-fight, ere victory was won!”

The beer betrayed.  “A firkin! – a bagatelle is such;

Yet, for Klaus Störtebeker, a barrel proved too much!

To yield to such a Victor, than to Bremeners, “midst war!”

“They dared not to attack us on Ocean’s boundless space!

Like Men, they dared not meet us, my Comrades! Face to face;

By yon Sun’s light they dared not!

But, when Night’s dark shades were spread.

With swords they dared not greet us, but –

With twigs, and a kitting thread!”

“Farewell!  I now must quit you, Companions of the wave!

I hasten to our Fathers; illustrious Heroes brave.

My Friends! – you’ll live in freedom,

To prove the words I’ve spoken:

Klaus hastens toward the block;

How creaks the fatal platform, and trembles ‘neath the shock!

As when, o’er reeds and rushes, fierce Boreas’ gales descend!

Lo! As the eye’s quick twinkling, and with precision dread,

Twas swift as flash of lightning, beneath May’s sunny skies:

Klaus walked from the ladder, while flows life’s purple gore,

As, when possessed of hawk’s eye – clear, penetrating, bright;

With footstep, bold and light!

His hands are crossed behind him! Behold the Pirate there,

As though, for recreation, he breaths May’s quickened air.

As Störtebeker wanders, a field-stone doth he lay

Upon his path, with caution, and, o’er it bends his way.

The third of his Companions – now – now – the half are free!

On! Onward! Still advancing – he moveth o’er the ground,

While flows the vital torrent,

From the Neck’s wide-opening wound!

The assembled countless thousands are

As, the Corpse of Störtebeker they view, so brisk and gay:

They fly in each direction, yet, wheresoe’er they roam,

That Spectre haunts each home!

Fear-stricken is the Headsman:  His sword falls to the ground,

And, on this foot-alighting, inflicts a desperate wound:

Yet venerable Judges – how pale are you, today?”

As vigorously, he marches, one saith, in trembling tone:

“You Pirate must be Satan!  Who doubteth it is he?

Who, headless, save the Devil, could walk – better than we!”

The course is almost ended, and nearly passed are all;

The Corpse becomes more feeble – he totters – will he fall?’

and a Judge enraptured cries,

A few of you Freebooters will yet, become our prize!”

The valiant Corpse now rallies.  As, fired by vengeance dread,

Klaus’ fist, cramped by convulsion, is,

toward the Boaster spread.

The duty to accomplish!  The Corpse collects, in haste,

Each quivering fibre’s vigour – he dauntless, to the last.

He makes redoubled efforts – gigantic – yet, the last.

The Corpse of Störtebeker hath all his Comrades passed!

Once more that Corpse bounds forward –

All think, Klaus shouts with triumph!

Dead, cold, and stiff he lies!

Behold, another wonder!  High on the scaffold dread,

View all posts by M
Ferdinand Freiligrath: “Napoleon In Bivouac” →
← Niclis Müller: “The Paradise of Tears”